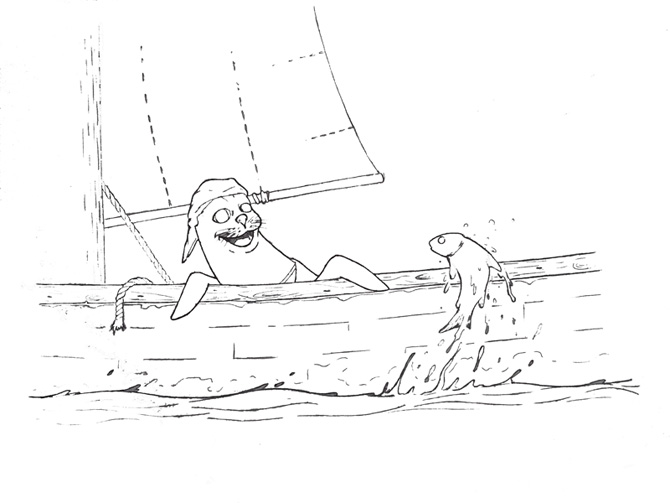 As I continue to work on my final project, my overall view on certain things begin to shift. If anyone were to go back and simply examine my first four or five blog posts, they could clearly see that I held a negative outlook on the internet as a whole. Is it truly a place where “the darkness” prevails as we’re led to believe? Or, I should probably say as I’ve led myself to believe. The truth is… no, I do not believe the internet is a place of eternal darkness. There might be shades of ugliness, but it wouldn’t be fair to overlook the good things about it. That image up there is meant to show that people can find amusement/contentment even in trivial things such as a funny meme or an awesome looking GIF that they encounter online as they surf through. The analogy of “sea” perfectly fits this notion that despite being dangerous, the vast “sea” is also beautiful.

I guess, I should provide an update on the project as well. I’ve finally began to annotate articles by using my Field Guide character’s new hypothes.is account. In our last class, I’d mentioned that I was beginning to see the merit of criticism against digital-dualism. So, I thought that I would start with Nathan Jurgenson’s article on Cyborgology in which he claims that “digital dualism is a fallacy”. Now, I should make it clear that I do not necessarily have a firm stance on the issue. I merely believe that there are certain cases for both the digital dualism and the augmented reality that could be considered intriguing.

Jurgenson’s article, Digital Dualism versus Augmented Reality, starts with his claim that digital dualism is an “outdated perspective”. That made me think of the in-class conversation I had about alternative perspectives on the “issue” that included one perspective that supported digital dualism, another perspective that claimed there was no such thing (possible Jurgenson’s intended stance), and lastly the perspective that advocates digital dualism is a concept that once existed but no longer relevant as the two realities are becoming one. So, by saying “outdated perspective”, Jugenson might’ve revealed here that he used to be “a believer” but that is no longer the case. Regardless, he asserts (and strongly) criticizes the notion of “first self” in real world and “second self” in digital reality. According to him, what people (media users) do offline is simply influenced by their online activities. Moreover, their online activities tend to reflect their offline identities. Hence, the augmented reality is the one reality where the focus should be at. Do I agree with what Jurgenson is claiming here? I’d probably say: “Yes and no.”

I still see the concept (?) of augmented reality as a limited way of looking at things. The underlining assumption is that people tend to behave the same regardless they’re interacting online or in the real world. Jugenson makes the case by giving Facebook as an example, but what about the other social media platforms that allow, and perhaps even (unintentionally?) encourage, their users to remain anonymous, such as Twitter, YouTube, or Reddit? I do not believe that it’s reasonable to make the same generalization when this particular factor is at play here. Perhaps I should reverse each position before asking the same question. If anonymity was a possibility in real world, would people behave the same? Would they follow the rules and the etiquette of society in the same manner? Maybe, or maybe not. It is important to note, however, that conditions aren’t necessarily the same; different “settings”, different conditions, and thus different expectations of behavior.

As a follow-up, I decided to go over and annotate the article, How To Kill Digital Dualism Without Erasing Differences, by Giorgio Fontana who attempts to refute (to a degree) what Jurgenson claims in his article. Fontana starts his response by asking the point of view which Jurgenson had based his on, whether it‘s “an ontological point of view or a sociological one”. He places his emphasis on clear definitions of the terms used in the argument to avoid any sort of confusion, which is a great approach. He talks about digital/analog dichotomy and states that the real world and the digital reality do not necessarily fall into opposing positions. This misplaced juxtaposition could be one of the key reasons why the ongoing argument isn’t nearing a unanimous end. It is also quite difficult to define reality itself as everyone tends to perceive it in a different way. Fontana also states that although “in the future it will harder to distinguish analog origin from digital augmentation”, it “is not a good reason to think that all things are already digital”.

So… yes. There are so many interesting things to extract from these two articles for the Field Guide project and analyze them. I’ll be using this notion and argument of augmented reality as a driving force in “the story” that I’m conducting. The line at which “the digital sea” and “the land” meets, my character called it on Twitter during our “conversation”. The things are becoming more clear as I find time to work on it. We shall see how the rest of it goes.